It was All Too Complicated for Anyone to Understand, Ctd 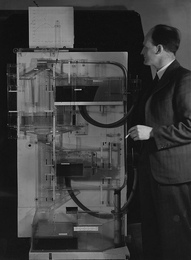 ‘Never invest in a business you cannot understand.’ – Warren Buffet

Marketers have known this forever. The key to selling a solution is to create a problem for it to solve. Hence, the mundane everyday realities of being human: dandruff flakes, under-arm odor, imperfect teeth, are portrayed as monstrous things that could get you shunned. No one will date you, mate you, hire you. You could be voted off the island. The quality of your character is as nothing compared to these superficialities. If you suffer from anything that may impair your attractiveness, you must correct this problem now, if it takes the last cent you have! Even if you have to access credit and take out a 2nd mortgage on your home.

After all, the solutions to these suddenly enormous problems are so simple. It’s merely a matter of money.

In the buildup to the financial crisis, the simple solution for the risk-averse and fudiciarily responsible was the Triple A rating. Any bond with such a rating was certified gold. No further investigation would be necessary. Behind the rating on a mortgage-backed bond was a world of complicated calculations. The truth of the bonds would not yield to any but the most dogged, possibly emotionally disordered, financial detective with weeks or months to spend digging.

Almost no one bothered.

Billionaire investor Warren Buffet has famously advised to never invest in anything that you don’t understand.

Thousands (millions?) of investors substituted ratings for understanding, having no idea that the ratings agencies didn’t understand either.

The bonds appear to have been designed that way.

But the pension fund was just sitting there

Salon interviewed author Ellen E. Schultz, an investigative reporter for the Wall Street Journal, on her new book, “Retirement Heist,” which details the mechanisms that big companies have used to loot their own employee’s pensions and earned benefits. See: The Theft of the American Pension : Salon – Economics

From the looks of this interview, the book doesn’t go far enough. The theft of retirement savings is bigger than this, as the entire credit and mortgage scheme that collapsed the global economy was about siphoning pensions and global savings from their protected pools through fraudulently overrated and priced investments. Now politicians want to sell the idea that Social Security earned benefits are just another promise that must be broken. Don’t believe it!

Once upon a time there was a merchant in Hong Kong who sold sardines along with many other things. Ever filled with schemes and ideas and plans to make more money, one day he packaged mud into a sardine can. He sold the can to another merchant, who added on his own brokerage fees and profits and sold the can to another merchant. The sardine can was passed along in this fashion from merchant to merchant, its cost growing as each made money while passing the can along to the next.

The fifth merchant opened the can and discovered to his dismay that the can was filled with mud instead of sardines. Indignant, he confronted the original merchant with his discovery.

The first merchant replied, “Why did you open the can?”

Was Friday the ‘tipping point’ for the economy?

On Sunday the Fed jumped in to prop up Fannie and Freddie. The problem is that they are holding a lot of souring assets that are worth a lot less than they’re booked for. That value is going to collapse from a lack of substance. If it’s not there, then it’s just not there! It’s just a matter of time.

Signs of the Times : Fed opens up a fire-hose of cash

Here’s a great graph found on the website of the 2008 Federal Reserve Bank of St. Louis. It reflects a part of the response to the ongoing financial crisis. Think the threat to the economy has been overstated? Take a look at the size of the response, reflected in this graph of the Total Borrowings of Depository Institutions from the Federal Reserve. The rules for borrowings have been changed, allowing the dollars borrowed to soar far above anything ever seen in the past.

All is Vanity: How to Topple an Economy in 10 Easy Steps

It’s been a long time since I read “The Bonfire of the Vanities” by Tom Wolfe but I still remember how the main character, Sherman McCoy, described his lucrative profession of investment banking as making money off crumbs from pieces of cake being passed around.

Last summer I was taking a class in management taught by a moonlighting mortgage broker. The so-called sub-prime crisis was beginning to bubble into the nightly news with tales of rising foreclosures and something my dad referred to as “liar loans”. There was one outspoken woman in my class who came right out with what she thought of the situation and of mortgage brokers in general.

“You all,” she said to the professor, “made a whole lot of loans that you shouldn’t have!”

“Do not believe everything that you hear in the news,” he replied.

More to the story? I wondered. Like what? I started reading commentary on the story. It wasn’t long before I came across a story in the Financial Times that made everything a whole lot clearer. It was accompanied by a diagram that showed how the mortgages were consolidated into packages and resold. I could see a couple of things from this illustration: that there had been a vital disconnect between the assessment of the risks and the eventual owners of the risks, and that this was such a lucrative market that the risk assessors had no real incentive to be cautious. Following that line, it wasn’t much of an extrapolation to see the fuel behind rising home prices, the attraction to speculators, that whoever was supposed to be regulating this market was asleep at the wheel, that therefore the protections put in place to prevent another Great Depression were being subverted and rendered ineffective, that the rest of the financial world could not have been ignoring these kinds of profits or the practices used to attain them, and that therefore this problem could not be limited to the sub-prime market.

I feared then that the problem went much deeper than sub-prime but I prayed that I was wrong.

I’ve described that illuminating diagram to people since then and sometimes they ask to see it but I didn’t bookmark it and can’t find it again. But if you are still interested and haven’t fallen asleep yet, I found this story in the NY Times, “Triple A Failure,” that sums up a key component of the problem: the SEC allowing credit rating agencies to evaluate bond backed investment vehicles even through there was an obvious conflict of interest since their biggest paying customers were the creators of the investment vehicles that were to be rated instead of the investors who would be buying them. From the article: “In effect, the government outsourced its regulatory function to three for-profit companies.”

Read the article and you’ll get a sense of the multipliers involved and it basically boils down to an enormous Ponzi scheme, profitable to the bankers and Wall Street gamers but leaving the actual investors holding the deflated party balloons.

So using the article as a guideline, here’s the recipe for disaster.

How to topple an economy in 10 easy steps.

The investment banks that provided the loans pocket lots of cash from the SPV and have completely offloaded their own risk. They’re happy! They go to write more loans! The more the merrier! They have no reason to care if the loans will be repaid, ever!

But it doesn’t stop there. There is too much money to be made by repackaging paper, disguising the risk, and reselling it all for much more than it’s really worth. So for steps 7 – 10:

7. They do it again. They take those bonds issued by the SPVs and they repackage the risky overpriced bonds into another pile and now the pile of bonds that were mortgages are called a CDO.

8. The CDO pays for the mortgage backed bonds by issuing more bonds. The new bonds are again rated by a credit agency. The better the rating, the more they can be sold for.

9. The CDO pays the credit rating agency for the ratings.

10. The bonds are sold on the market to investors and Wall Street pockets the cash. The risk now has exponentially multiplied again but that’s not reflected in the rating or the price.

Investment banks pump as much money as they get into writing more loans. They make it clear to the mortgage brokers that their job is to give that money away to anyone who wants it. The mortgage brokers get nice commissions on every loan they write for the banks so they’re highly motivated to write loans. Blaming the mortgage brokers for loan defaults is like blaming the car salesperson for the repossession of the car they sold. It wasn’t their job to evaluate the risk. It was their job to sell and write loans and submit them for evaluation to the investment bank that was supplying the money.

The more credit is available, the more people buy. That’s been documented by social psychology research. The more houses people buy, the more the housing prices rise. Up, up, up the prices go. Now people see that they can make money by buying houses and reselling them at a profit so speculation blooms. It isn’t about homes anymore; it’s about money but the credit rating agencies are still rating the risk as if it’s all about home owners who are highly motivated to keep their homes.

People who already own homes watch their values rise. Yay! Home equity loans mean you can turn that value into cash! You can then spend the cash! Yay! Vacations and bling for everybody! Hey look pa, the economy is doing great! 70% of the economy is consumer-driven so all this spending of home equity can really inflate what the economy looks like. The actual amount of home equity proved to be an illusion.

Picture the sub-prime mortgages (and all other credit related paper that was securitized into bonds like consumer and home equity loans – also mentioned in the article) as the tiptop of a pyramid and the pyramid is inverted, balancing on that tip and that tip is crumbling. It didn’t have enough substance. That’s the reality of the current stock and bond markets.

That was the spiral up. Now for the spiral down. The dominos fall. Guess I should write about that next, unless I’ve put everyone to sleep by now.

“Scary does not begin to describe the feeling of learning that there are only three or four hard working people at a major rating agency judging the creditworthiness of all the investment banks and they don’t even have their own model.” – David Einhorn, “Private Profits and Socialized Risk” Grant’s Sprint Investment Conference, April 8, 2008